Baby, this town rips the bones from your back!
It's a death trap! It's a suicide rap!
We've got to get out while we're young!
'Cause tramps like us...

A 2-player RPG about two people--a Driver, longing to escape from this town, and a passenger, who wants to stay and make their stand here and now--having their final argument, before an ultimatum is made, and their fates are decided forever more.

Requires a standard, 52-card playing card deck, and about an hour of time.

Inspired by Born to Run by Bruce Springsteen, with a particular debt to Thunder Road and Born to Run. Listen here:
https://open.spotify.com/album/43YIoHKSrEw2GJsWmhZIpu

Created as part of Record Collection 2K19, an incredible game jam in which designers were challenged to create a game built around a particular album. You can learn more, and read more of the games, at https://itch.io/jam/recordcollection2k19.

In order to download this RPG you must purchase it at or above the minimum price of $7.99 USD. You will get access to the following files:

Support this RPG at or above a special price point to receive something exclusive.

For each copy of Baby, We Were Born to Run! sold, a copy of the game is made available to members of the community for whom the listed price would be a hardship. If you're unable to budget for the game, please claim one of these free copies, no questions asked.

Baby, We Were Born To Run is a two-player, card-based rpg inspired by the Springsteen song of the same name.

It's 4 pages, with a single photo graphic, but the layout is extremely clean and easy to read.

Setting-wise, Born To Run is very loose. It wants the same framing as the song, but it isn't very specific outside of that, and you need to provide your own world details.

The two characters each have a defined thing they want (to leave town, and to stay in town) but their characterization is unspecified outside of that. One wants to leave town. The other wants to stay. It's on you as players to fill in the rest.

Mechanically, Born To Run is very focused. You each start with a hand of cards and a deck in the center of the table. You burn one card off the deck into the discard, and then you take turns drawing from the deck or the discard. The goal is to assemble groups of matching or sequential cards, and each of those has a value of 0. Anything not in a match or a sequence adds points to your hand, and the first player to get under 10 points ends the game.

During this gameplay, every card triggers a piece of a conversation based on its suit. These suit-based prompts are deeply flavorful, and they add a ton of atmosphere to the game.

When the endgame does hit, it branches and forks and can lead to a number of unique resolutions---with the PCs finding some measure of happiness or subsiding into stasis---depending on what they choose to do and how they feel about it.

Luck is a major factor of gameplay, and while the odds are that one PC will be at least a little bit happy in the end, it's less probable that both will.

And either way, it depends on the cards.

Overall, Born To Run is a cool transformation of a song into game form. It makes some compromises on the game side to better replicate the song---steering away from a more concrete setting and defined characters---but it has a *lot* of flavor and it's quite engaging if you lean into the acting and storytelling. If you like short, character-centric games---and especially if you like Springsteen---give this one a shot.

-It's not super likely, but the endgame can trigger in an opening hand.

-What if both players Leave It All On The Line? Again unlikely, but I think it's possible to engineer this if you both coordinate.

this game is so good! it runs smoothly, its use of card mechanics with the interplay of Born to Run lyrics blew my mind, and i told a bittersweet, heartwrenching story with my friend in the process :') 1000/10 would recommend, it's easy to pick up and play, and boy howdy do you Get Into It immediately thanks to the game's high-stakes emotional storytelling it primes you for. this really captures The Boss's energies in a game. as a new jerseyan springsteen runs in my DNA, so i may be a tad biased, but this game rules, and you should play it. 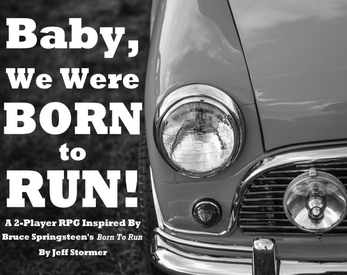